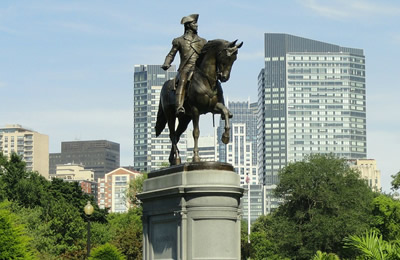 As you walk down cobblestone streets nearly four centuries old, you may think about the great patriots, inventors and poets who have called Boston home and contributed to its unique history. Today, Boston is renowned for its superior universities, excellent museums, art galleries, libraries and diverse neighborhoods. From Boston Common to Faneuil Hall to Fenway Park, you’ll see firsthand how Boston earned the nickname, “The Hub of the Universe.”

If you want to immerse yourself in even more of America’s history, Salem, Plimoth Plantation, and the Battlefields of Lexington & Concord are only short drives away and make the perfect addition to any Boston trip!

Boston Common
The country’s oldest public park, the 45 acres of Boston Common have served as a cow pasture, a military camp, and the site of hangings, protest marches, and visits by dignitaries. Today the Common is the first stop on the Freedom Trail.

Faneuil Hall
Often referred to as “the home of free speech” and “the Cradle of Liberty,” Faneuil Hall hosted America’s first Town Meeting.

Freedom Trail
The Freedom Trail is a 2.5 mile red-brick walking trail that leads you to 16 nationally significant historic sites, every one an authentic American treasure.

JFK Memorial Library
This museum captures the 35th President’s accomplishments and legacy in video and sound recordings and fascinating displays of memorabilia and photos.

Museum of Fine Arts
Founded in 1870, this museum is one of the largest museums in the United States and contains one of the collections of Monet.

Museum of Science
Among the 500-plus exhibits, you might meet a dinosaur or a live butterfly, find out how much you’d weigh on the moon, battle urban traffic (in a computer model), or climb into a space module

New England Aquarium
Founded in 1969 on the city’s waterfront, it is considered one of the first modern public aquariums and is credited with revolutionizing the modern aquarium

Old North Church
Officially named Christ Church, the Old North Church is best known for its steeple, which famously displayed the lanterns signaling the advance of the British troops – “one if by land, two if by sea.”

Paul Revere House
On the night of April 18, 1775, silversmith Paul Revere left his small wooden home in Boston’s North End and set out on a journey that would make him into a legend.

Site of the Boston Massacre
On this site, a skirmish between an angry group of colonists and a few terrified British soldiers erupted into the first deadly encounter between Boston colonists and British “red coats.”

Battlefields of Lexington & Concord
Visit the Minuteman Statue, The Old Burying Ground and the National Historical Parks as you learn about the first battle of the Revolutionary war.

Walden Pond
Henry David Thoreau lived at Walden Pond from 1845 to 1847. His experience provided the material for the book Walden, which is credited with helping to inspire awareness and respect for the natural environment.

Mayflower II
The Mayflower II is a replica of the 17th century ship Mayflower, celebrated for transporting the Pilgrims to the New World

Salem Witch Museum
Visitors are given a dramatic history lesson using stage sets with life-size figures, lighting and a narration – an overview of the Witch Trials of 1692.

Old Pepper Company
Made fresh since 1806, it is the oldest candy company in the United States.