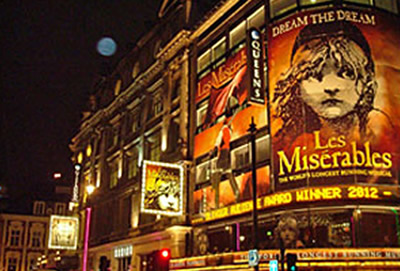 London is the world’s most popular destination for foreign tourists. Just like New York City’s Broadway, London’s West End dazzles audiences daily with the most outstanding theatrical productions. Come discover the rich history, landmarks and culture that can only be found in London!

We will arrange an incomparable tour package that will include round-trip airfare, private motorcoach for all local touring, tour escort 24 hours/day, deluxe hotel accommodation in twin occupancy, breakfasts, dinners, tickets to 3 shows, theatre workshops, admissions to museums and attractions, free chaperones and a $500 stipend.

Shakespeare’s Globe Theatre
This open-air playhouse designed in 1599 is where Shakespeare worked and for which he wrote many of his greatest plays. Today, the reconstructed theatre offers and workshops.

Windsor Castle
For over 900 years, this royal palace and fortress has been the official residence of the Queen.

Trafalgar Square
For many decades, this public square has been a preeminent gathering spot for demonstrations and gatherings.

Big Ben
Completed in 1859, this iconic cultural icon is one of the most prominent symbols of the U.K.

Tower of London
Work commenced on this riverside fortress 900 years ago, and the structure we see today was completed in the 14th Century.  The Crown Jewels as well as many other treasures are housed here.

Tower Bridge
Crossing the River Thames, this iconic landmark stretches 800 feet in length and can be raised to allow river traffic to pass underneath.

Buckingham Palace
Home to the monarchs of the U.K. since 1837, visitors from all over the world gather to watch the ceremonial changing of the Queen’s Guard.

Downing Street
This street serves as the official residence to Prime Minister and Chancellor of Great Britain.

Westminster Abbey
Built nearly 800 years ago, virtually every monarch has been crowned to the throne in this architectural masterpiece.

St Paul’s Cathedral
Sir Christopher Wren’s masterpiece is one of London’s most famous and recognizable sights.  It is here where Prince Charles and Lady Diana Spencer were married.

British Museum
Amazing collections including objects such as the Rosetta Stone, Parthenon sculptures and Egyptian mummies can all be seen here.