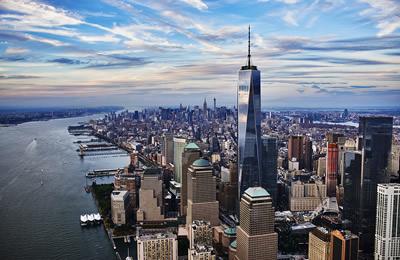 Conveniently located near New York City, Junior Tours, the premiere educational student travel and tour company, has been orchestrating student trips to NYC for over 50 years. The advantage of being so close to NYC allows Junior Tours and its team of tour professionals, the opportunity to be part of the highlights and current activities that NYC offers.

By virtue of the density and diversity of its population, its dynamic economic activity and vibrant cultural life, New York City stands alone as the most exhilarating city in the world. From the moment you arrive you feel its energy and enjoy its wonders.

From Broadway to Wall Street and MoMA to SoHo, with a visit to this one city, you can inspire your students to pursue a career in theater, finance, fashion, journalism or the arts.  Junior Tours, the leader in student travel, is uniquely qualified to customize an insightful visit to the Big Apple.

The professional tour team at Junior Tours looks forward to fulfilling your dreams of seeing the sights of NYC and utilizing our years of experience with New York City student tours.

Statue of Liberty
This iconic symbol of freedom was a gift of friendship from the people of France in 1886. Made of copper, Lady Liberty holds a book with the inscription July 4, 1776 in one hand a torch of freedom in the other.

Ellis Island
Ellis Island, situated just north of the Statue of Liberty, opened in 1892 and closed in 1954. Over that time more than 12 million immigrants passed through on their way to America. Today it is an Immigration Museum.

Times Square
Times Square, often referred to as the “Crossroads of the World,” is the iconic center of Manhattan. It hosts a concentration of well-known theaters, stores and animated billboards.  More than a million people gather each year on New Year’s Eve to the ball drop.

St. Patrick’s Cathedral
It is the largest decorated gothic-style Catholic Cathedral in the United States and has been recognized throughout its history as a center of Catholic life in this country.

Top of the Rock
Atop 30 Rockefeller Plaza, enjoy a sensational panoramic view of Manhattan from this world class observatory.

United Nations
The Headquarters of the World Organization is located on an 18-acre site on the East side of Manhattan. Each building was designed and decorated by celebrated architects and artisans.

9/11 Memorial & Museum
Serves as the country’s principal institution concerned with exploring the implications of the events of 9/11, documenting the impact of those events and exploring 9/11’s continuing significance.

Trinity Church
Originally founded in 1697 and later rebuilt in 1846 after a fire, Trinity Church dominated the skyline of early lower Manhattan. Buried in the adjacent cemetery are Alexander Hamilton and Robert Fulton.

Federal Hall
At a time when New York City was the nation’s capital, it was here that George Washington took the oath of office as the first U.S. President on April 30, 1789.

Intrepid Air Sea Space Museum
The Intrepid Sea-Air-Space Museum is the country’s largest museum dedicated to the armed forces and the space program.

Grand Central Station
Constructed of glass and steel, the 100-foot wide by 650-foot long structure rivaled the Eiffel Tower and Crystal Palace for primacy as the most dramatic engineering achievement of the 19th century.

South Street Seaport
Known in the early 19th century as the “Street of Ships,” Pier 17 is where New York meets the sea. There are many great shops and restaurants today.

Museum of Natural History
Created in 1869, the museum houses more than 30 million artifacts dedicated to the research of the earth and its myriad of life forms.

Broadway
“The Great White Way” is home to 40+ theaters that feature the very best of what live theatrical performance aspire to be.

Workshops
Master classes in acting, improvisation, musical theatre and vocal training are offered.  You will work with broadway professionals in a private studio setting to provide your students valuable training.

Carnegie Hall
Carnegie Hall, as it came to be known in the 1895 season, was an immediate success. Visitors to Carnegie Hall today can tour the facilities or enjoy one of the many wonderful musical performances that take place here.

New Amsterdam Behind the Magic Tour
Discover the beautifully restored art and architecture of this landmark Broadway theatre built in 1903, once home to the legendary Ziegfeld Follies.

Apollo Theater
Located in the heart of Harlem, the Apollo Theatre has been the center stage for showcasing African-American talent since the 1930s.

Costume Workshop
Meet with a Broadway costume designer to discuss how they design, source, and construct the clothes for actors in a production.

F.I.T.
Best known for its innovative and award-winning exhibitions, the museum has one of the world’s most important collections of fashion and textiles.

Garment Center
This is one of the busiest areas of the city with workers pushing racks of clothes down the street and transporting bolts of cloth between factories. One-third of the clothes manufactured in this country are made here.

Lower East Side Tenement Museum
The ‘Piecing it Together’, ‘Getting By’ and ‘Cofino Tours’ offer students a great historical perspective on the immigrant workers experience at the turn of the century.

Museum of Art And Design
MAD collects, displays, and interprets objects that document contemporary and historic innovation in craft, art, and design. In its exhibitions and educational programs, the Museum celebrates the creative process through which materials are crafted into works that enhance contemporary life.

Federal Reserve Bank (high school groups only)
Learn more about the role of central banking and visit the Gold Vault- a room situated 80 feet below street level and housing 1/4 of the world’s supply of gold bullion.

Museum of American Finance
This museum is the nation’s only independent public museum dedicated to celebrating the spirit of entrepreneurship and the free market tradition which has made NYC the financial capital of the world.

Get a behind-the-scenes look at “The World’s Most Famous Arena”.  It is not only home to Knicks and Rangers, but also host to world-class events including legendary boxing matches and concerts.  Your tour will include interactive displays, virtual reality, an informative tour guide and access to unique areas.

Macy’s offers a fun, fast and fact-filled store tour. Learn how Macy’s has grown into America’s largest department store with over 800 locations from its humble beginnings, over 150 years. A knowledgeable tour guide will discuss history, marketing concepts, merchandising, visual techniques and more.

Madame Tussaud’s Wax Museum Marketing Seminar
Come and visit your favorite celebrities and have your picture taken with today’s pop culture stars in the favorite attraction for kids.

Central Park
Central Park is the first public park built in America. Inside its more than 850 acres, some popular stops include Strawberry Fields, the Great Lawn, Bethesda Fountain and the Alice in Wonderland statue.

Metropolitan Museum of Art
Its 32 acres of floor space make it the largest art museum in the Western Hemisphere and over 5 million people visit the museum every year.

Whitney Museum
The Whitney Museum houses one of the world’s foremost collections of twentieth-century American art.

Cloisters Museum
This museum, a division of the Metropolitan Museum of Art, is dedicated to the art and architecture of medieval Europe, with a focus on the Romanesque and Gothic period.

Chinatown
New York City’s Chinatown is the largest concentration of Chinese in the western hemisphere. There are many small shops selling inexpensive souvenirs and knock off handbags, watches and sunglasses.

Little Italy
Walking beside the narrow, cobblestone streets beneath the fire escapes of turn-of-the-century tenements, you’ll enjoy the sights, sounds and smells of Italian cuisine.

SoHo
An acronym for SOuth of HOuston (pronounced “how-stun”) Street, this eclectic neighborhood has a long history of appealing to New York City’s artistic community.

Greenwich Village
For over 100 years, this small area below 14th Street and west of Broadway has been a Mecca to the creative, rebellious and Bohemian.

Harlem
Harlem is a neighborhood in upper Manhattan, long known as a major African American cultural and business center.