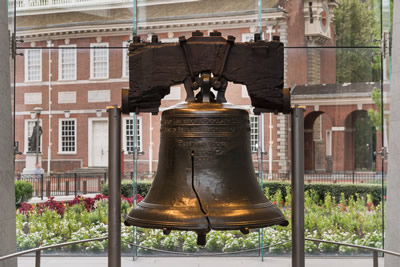 Back in 1776, Philadelphia was the city where a new idea called “The United States of America” was put down into words. It was here that the Declaration of Independence was signed by Jefferson, Franklin and others who risked everything so that America would be free.

See Betsy Ross’s hand sewn Old Glory and the Liberty Bell that first rang out for democracy in this Nation. From Independence Hall to the Philadelphia Museum of Art to Pat’s King of Steaks, the City of Brotherly Love is a center of American history and culture.

Betsy Ross House
Betsy Ross is best known as the designer of the first flag of the United States. The so-called “Betsy Ross Flag” had 13 stars and stripes.

Christ Church
Benjamin Franklin, Betsy Ross, George Washington and so many more come to life in the living history of a truly American church.

Congress Hall
This historic sight was temporarily home to the U.S. Congress from 1790-1800 while Washington, D.C. was under construction.

Franklin Court
This museum is located on the former site of Ben Franklin’s home and traces his life as publisher, politician, postmaster, printer, and inventor.

Franklin Institute Science Museum
There are interactive displays and a workshop modeled after the one in which Franklin worked on his inventions here at this interactive science museum for students.

Independence Hall
Many important events in our nation’s history took place at this historic landmark. George Washington was appointed commander in chief of the Continental Army, the Declaration of Independence was adopted and the U.S. Constitution was drafted at Independence Hall.

National Constitution Center
This interactive history museum is the only museum devoted to the U.S. Constitution and the story of “We, the people…

U.S. Mint
Visit the U.S. Mint to see how the United States Mint fulfills its mission to make, sell, and protect United States circulating coins. They will also describe the design process and show you around the engraving rooms and production floors.