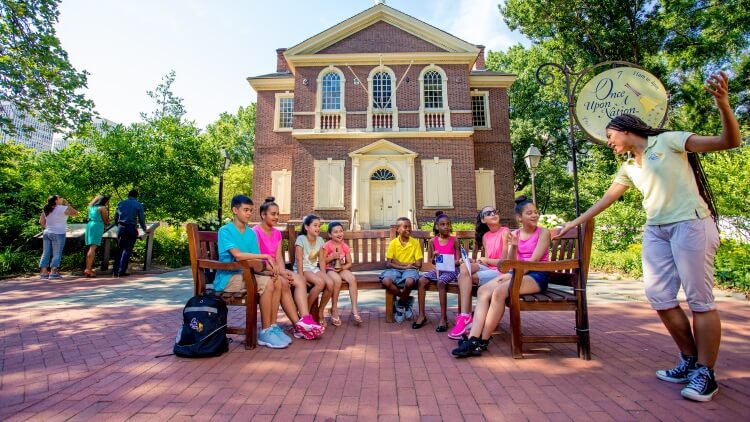 Cheesesteaks and liberty may seem like an unlikely duo, but that’s what you’ll find in Philadelphia.  This city is a piquant blend of street-smart Irish and Italian-American attitude and American history that makes it unlike any other city in the nation.

While the locals may seem a little brusque at first, they’re good folk at heart, fueled by a time-honored craft beer tradition, whiskey and meat dripping with melted cheese, doled out at any number of fine cheesesteak establishments throughout the city.

Philadelphia offers students lessons in liberty, but it also provides a window into a city which drips as much attitude as it does cheesy goodness.

Brotherly love:  Once Upon a Time

This is the city of brotherly love, reflected in its Greek name.  In that spirit, the City of Philadelphia has established the award-winning Once Upon a Time story-telling benches, where trained storytellers relate true tales of this historic city you won’t hear anywhere else.

Lean in to capsule 3-5 minute histories from these master orators.  Students can collect a story-telling flag at the Philadelphia Visitors’ Center and collect a star to stick on it from each of the 13 tale-tellers at 13 historic locations.  These signify the 13 original colonies.

If there’s one thing you can say about Philly attitude is that it’s borne of a love for this place and this program richly reflects that.

It was in 1776 that Philadelphia was the site of the Declaration of Independence’s signing.  But it’s here you’ll also find the fabled Liberty Bell and Betsy Ross’s original, handsewn contribution to our national identity – the American flag.  With its original 13 stars and stripes, it reminds us how far we’ve come since we first set out as a fledgling nation.

Independence Hall is another historical site which figures prominently in the moment the USA came to be.  This is where the Declaration of Independence was signed, where George Washington was commissioned as the first Commander-In-Chief and where our treasured Constitution was drafted. 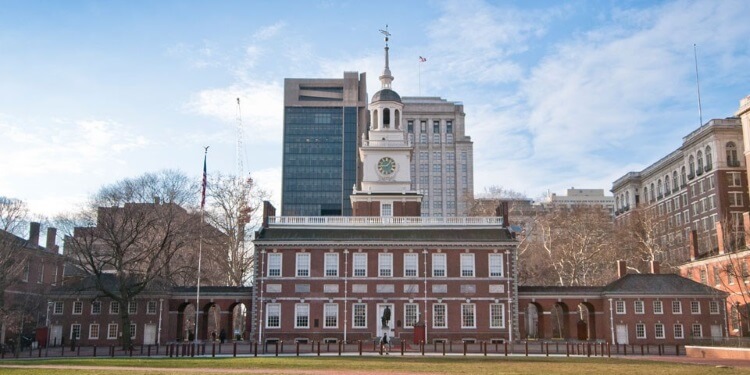 Established in 1930, there is no cheesesteak joint more iconic than Pat’s.  It’s here that the art of the cheesesteak – which stands as an icon of Philadelphia perhaps as potent as the Liberty Bell – has been perfected.

1930 is also the year that the Olivieri brothers decided to add a twist to their hot dog stand, substituting chopped steak for dogs and adding melted cheese and onions.  Philly folklore relates that a passing cabbie saw what was going on, ordered one and then told everyone he met about the culinary delight he’d just experienced.

The Philly cheesesteak phenomenon was born!  While you can now find this sandwich pretty well everywhere, don’t tell a native you’ve had better than Pat’s anywhere but Philly.

That could earn an errant educator some major Philly attitude!

Junior Tours has been taking students places for over 50 years.  We’re a small, boutique operation that tailors itineraries to curricular needs and educator vision.