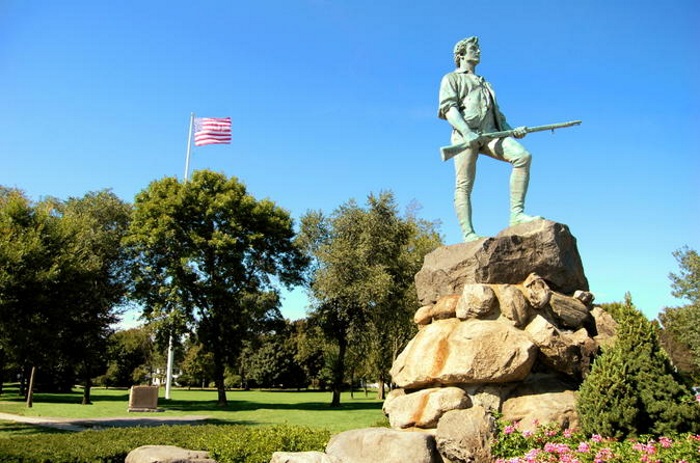 Established almost 4 centuries ago, Boston is a national treasure, where your students can encounter American history at its most dramatic.

Revolution in the air.

It’s just outside the city of Boston that the first battle of the American Revolutionary War took place, at Lexington and Concord.  The Old Burying Ground and Minuteman statue can be seen here, as students are walked through pivotal moments in the formation of our nation.

Bunker Hill is another living monument to the American Revolution, hosting one of the most important battles of the struggle for America’s freedom from British imperial rule, at Breed’s Hill in 1775.

Boston’s famous Tea Party took careful planning and that planning took place at the Old South Meeting House in 1773.  5,000 colonialists met here to set the wheels in motion for this act of rebellion, but people have been meeting here for three centuries, right until the present.

Students will be treated to a rich, exciting encounter with the fullness of the American story at these and other sites in and around Boston.

The pilgrims who landed at Plymouth Rock were conveyed in the famed vessel, the Mayflower.  Today, a replica of this historic 17th ship offers students a window into the worlds of their ancestors, who came to flee tyranny.

The terror and communal fear of the Salem Witch Trials can be discovered by students desiring to understand all aspects of American history.  The museum features dramatically presented displays which remind us how rapidly neighbours can become enemies.

The site of the Boston Massacre is a stark memorial to the tensions between the British and the colonialists during the revolutionary period.  Here, British red coats encountered the wrath of the colonialists and felt the brunt of their burning desire for freedom.

Paul Revere’s midnight ride started here in Boston on April 18, 1775.  This unassuming silversmith was to become a legend of the American Revolution, teaching students that even the most modest person can make an enormous impact.

The Freedom Trail is a 2.5 mile historical walk, taking visitors to 16 historically-significant sites.  Experiencing the birth of the USA through the monuments which commemorate its institution is a walk through some of the nation’s most turbulent and formative moments.

The scope of historical experiences available to student travel groups visiting Boston is broad and richly populated by the voices of freedom fighters and philosophers, witches and poets.  The deeds of those who laid the foundations of the USA live on here as our legacy, reminding us of the cost of freedom.

At Junior Tours, we’ve been professional student educational tour operators since 1967.  We bring your group personalized itineraries which honor educator vision and make learning an adventure.