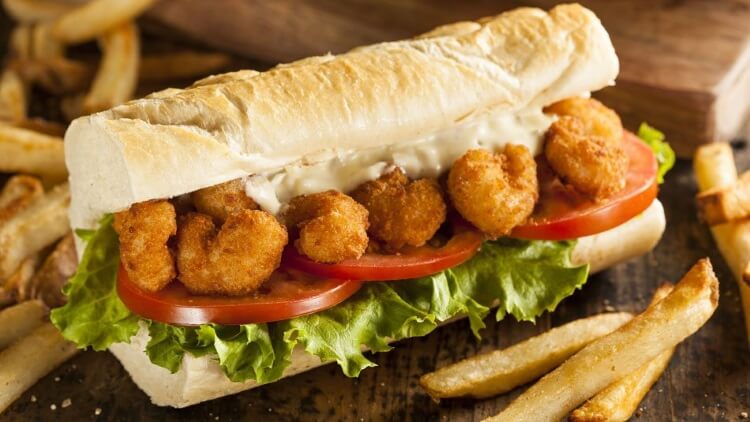 A lot of people think of NOLA as a place almost entirely constructed of Mardi Gras beads and the feathers which sprout from the massive costumes of the city’s famed Mardi Gras Indians. But while Mardi Gras is a huge part of the New Orleans cultural experience, the culinary traditions of the city are one of its most vibrant attractions.

Born in the cauldron of one of the USA’s most fascinating and unique places, New Orleans food reflects centuries of cultural influences as diverse as Creole, Cajun, African-American, French, Spanish and even Irish.

In this post, we offer a quick guide to New Orleans food, in some of its most representative dishes.

Now a staple of New Orleans’ culinary scene, this sandwich has a colorful story.  When the city’s streetcar workers went on strike in 1929, they sacrificed their paychecks to get better remuneration and working conditions.  Inventive locals banded together to feed them on the picket line and the Po’ Boy was born.

Filled with fried shrimp or meat and served on crusty baguette, be sure to ask that your Po’ Boy be “dressed”, with tomato, lettuce, mayonnaise and pickles (onions, too if you like them). Get yours at Johnny’s Po’ Boys, in the French Quarter.

Some refer to New Orleans as the northernmost Caribbean city and this dish would seem to prove the point.  Flavored with the pork bones from Sunday dinner, this dish is traditionally eaten on Mondays.

Every family and restaurant prepares a different version of this hearty staple of NOLA cuisine and each and every one swears theirs is the only way to cook it.  Get to know a local and wangle an invitation for Monday dinner.

Boudin is a Cajun specialty that’s not to be missed.  This delicious sausage is different from any you’ve ever eaten.  Liberally stuffed with seasoned meat and “dirty” rice (another Cajun favorite), Boudin is a staple all over southern Louisiana.

We recommend that you seek out Boudin at one of the many festivals in New Orleans.  Festival stalls in the city tend to be brimming with great chefs creating classics like this insanely tasty sausage.

Gumbo’s origins are rooted in Africa.  While those origins have taken on baggage over the centuries, the word itself is West African and means “okra” – frequently used in gumbo.

There are many varieties, but under the various rubrics, variations on the dish abound.  As with everything else in New Orleans, this fragrant dish draws on numerous cultural influences.  When you eat “filé gumbo”, you’re eating a Choctaw Native version, as the dish contains sassafras.  The roux used as a base for this stew hails from France, but NOLA’S version is distinct and worlds away from the original.

Eat it at Dooky Chase, in Uptown New Orleans.

Junior Tours has been taking students on extraordinary educational adventures since 1967.

Has a quick guide to New Orleans food whet your appetite?  Contact us for a sample itinerary and quote.