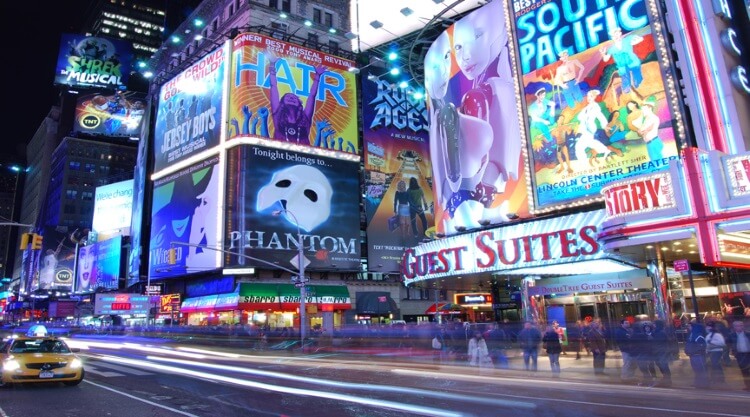 Top Broadway Shows for Students in 2018 (so far)

A trip to New York City isn’t complete without seeing a show on the Great White Way, where the lullaby of Broadway rings across the footlights to embrace delighted audiences.

2018 promises more of Broadway’s famed extravaganza of superior talent in music, dance and acting.  Here are our picks for top Broadway shows for students in 2018 (so far).  Feast your eyes on this dizzying array of spectacles to be enjoyed over the coming year, with your students in mind.

Harry Potter and the Cursed Child.

At the top of our list is the 8th installment of the Harry Potter franchise to hit Broadway.  Now that Harry’s grown and has graduated from the famed Hogwarts, he’s working in the Ministry of Magic.

Married with three school age children, his magical past hasn’t just earned him a high-level position with the government.  It’s following him around.  His youngest, Albus, isn’t anxious to follow dad into the family vocation, but he may have to, as darkness rises around them both.

We all know at least one, so this Broadway adaptation of the popular Tina Fey film promises to entertain those of us who are sometimes the targets of girls like “the Plastics”.

Watch the Queen Bee get stung in the end, as a newcomer to the Illinois high school the story unfolds in locks horns with the meanest girls in town.  Rejoice, as nice triumphs over nasty.

This brand, new musical is making waves and that’s exactly what it’s about – disturbing the placid waters of a small town with small minds.

When Emma’s prom is cancelled because she wants to take her girlfriend as a date, all heck breaks loose.  News of the cancellation reaches a group of well-meaning celebrities who descend on the town, billowing clouds of justice.  Naturally, they make matters worse.  In the end, though, inclusion triumphs over ignorance, peace is restored and Emma gets her corsage.

From his days of clutching Fay Wray in his hairy paw while scaling the Empire State Building, this massive, wayward gorilla has been a cultural icon.

Now appearing on Broadway, the eye-popping new production features theatrical innovations as diverse as robotics, stagecraft and puppetry.  This sensitive reimagining of the epic tale so familiar to us recasts the role originally played by Fay Wray as the story’s heroine, as she strives to save a 20-story tall gorilla.

The story of Alexander Hamilton concerns an ambitious man, determined to rise to the top of a burgeoning nation’s fledgling government.  And rise he did.

As the confidant and aide of the USA’s first President, George Washington, Hamilton went on to shape the foundation for the international fortunes of our nation.  This passionate retelling of his story gives shape and texture to history, while offering exceptional performances.

Founded by teacher Marty Abrams, Junior Tours has been taking students places since 1967.  Committed to offering your students exceptional educational experiences, we tailor your tour to educator objectives.  Contact us to find out more.